Samosas are a fried delicacy that can be filled with anything - meat, fish, poultry or veggies. When making your own samosa dough, be sure to break up all the ghee. Just be careful not to over-mix the dough...you don't want to over-heat it with your hands. After your dough is prepared and properly refrigerated, you're ready to shape and stuff your samosas. Here's a tip: be careful not to over-stuff. If you do, the samosa will break apart while you're deep-frying it. You'll also want to fry in batches so you don't overcrowd the pot and cool down the oil. 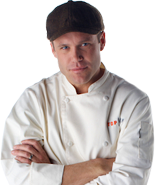