An oyster is another type of shellfish that is considered a bi-valve, due to the two opposing matching shells. The natural flavor varies greatly depending on the location where the oysters are harvested - whether from the East or West coast. Oysters harvested during the months of September through April tend to be better because of the cooler waters. When preparing oysters it is important to clean the outer shell with a small brush to make sure all grit is removed. Be careful during the shucking process, and simply serve them raw on a bed of ice with classic condiments. 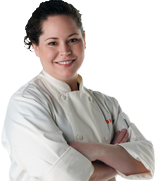 Until recently, Stephanie was the chef/owner of Scylla in Chicago. She is now enjoying traveling, both domestically and abroad, while planning her next exciting venture. Stephanie's biggest lure in cooking is seafood because the same fish can be cooked so many different ways - grilled, poached, cured, pan roasted - and this brings out different attributes, flavors and textures. Stephanie says in her cooking, contrasting and complementary elements are essential, but balance is non-negotiable. She has always been very driven and a bit of a risk-taker. "Once I set my mind to something, I follow through. It always has to be 110%."